The first all-sky survey performed by the eROSITA X-ray telescope on-board the Spektrum-Roentgen-Gamma (SRG) observatory has revealed a large hourglass-shaped structure in the Milky Way. These “eROSITA bubbles” show a striking similarity to the Fermi bubbles, detected a decade ago at even higher energies. The most likely explanation for these features is a massive energy injection from the Galactic centre in the past, leading to shocks in the hot gas envelope of our galaxy. 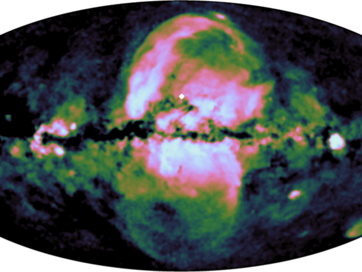 The eROSITA bubbles. In this false-colour map the extended emission at energies of 0.6-1.0 keV is highlighted. The contribution of the point sources was removed and the scaling adjusted to enhance large-scale structures in our Galaxy. © MPE/IKI 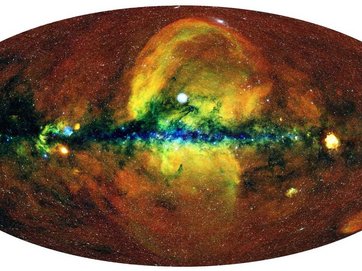 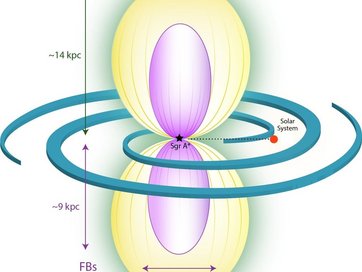 Schematic view of the eROSITA (yellow) and Fermi bubbles (purple). The galactic disk is indicated with its spiral arms and the location of the Solar System is marked. The eROSITA bubbles are considerably larger than the Fermi bubbles, indicating that these structures are comparable in size to the whole galaxy. © MPE

Astronomers have detected a remarkable new feature in the first all-sky survey map produced by the eROSITA X-ray telescope on SRG: a huge circular structure of hot gas below the plane of the Milky Way occupying most of the southern sky. A similar structure in the Northern sky, the “North polar spur”, has been known for a long time and had been thought to be the trace of an old supernova explosion. Taken together, the northern and the southern structures instead are reminscent of a single hourglass-shaped set of bubbles emerging from the Galactic center.

The large-scale X-ray emission observed by eROSITA in its medium energy band (0.6-1.0 keV) show that the intrinsic size of the bubbles is several kiloparsecs (or up 50,000 light-years) across, almost as large as the entire Milky Way. These ‘eROSITA bubbles’ show striking morphological similarities to the well-known ‘Fermi bubbles’ detected at in gamma-rays by the Fermi telescope, but are larger and more energetic.

„The sharp boundaries of these bubbles most likely trace shocks caused by the massive injection of energy from the inner part of our galaxy into the Galactic halo,” points out Peter Predehl, first author of the study now published in Nature. “Such an explanation has been previously suggested for the Fermi bubbles, and now with eROSITA their full extent and morphology has become evident.”

This discovery will help astronomers to understand the cosmic cycle of matter in and around the Milky Way, and other galaxies. Most of the ordinary (baryonic) matter in the Universe is invisible to our eyes, with all the stars and galaxies that we observe with optical telescopes comprising less than 10% of its total mass. Vast amounts of unobserved baryonic matter are expected to reside in tenuous haloes wrapped like cocoons around the galaxies and the filaments between them in the cosmic web. These haloes are hot, with a temperature of millions of degrees, and thus only visible with telescopes sensitive to high-energy radiation.

The bubbles now seen with eROSITA trace disturbances in this hot gas envelope around our Milky Way, caused either by a burst of star formation or by an outburst from the supermassive black hole at the Galactic centre. While dormant now, the black hole could well have been active in the past, linking it to active galactic nuclei (AGN) with rapidly growing black holes seen in distant galaxies. In either case, the energy needed to power the formation of these huge bubbles must have been enormous at 10^56 ergs, equivalent to the energy release of 100,000 supernovae, and similar to estimates of AGN outbursts.

“The scars left by such outbursts take a very long time to heal in these haloes,” adds Andrea Merloni, eROSITA Principal Investigator and ORIGINS member. “Scientists have been looking for the gigantic fingerprints of such past violent activity around many galaxies in the past.” The eROSITA bubbles now provide strong support for large-scale interactions between the Galaxy core and the halo around it, which are energetic enough to perturb the structure, energy content and chemical enrichment of the circumgalactic medium of the Milky Way.

“eROSITA is currently completing the second scan of the entire sky, doubling the number of X-ray photons coming from the bubbles it has discovered,” points out Rashid Sunyaev, Lead Scientist of the SRG Observatory in Russia. “We have a tremendous amount of work ahead of us, because the eROSITA data makes it possible to single out many X-ray spectral lines emitted by highly ionized gas. This means that the door is open to study the abundance of chemical elements, the degree of their ionization, the density and temperature of the emitting gas in the bubbles, and to identify the locations of shock waves and estimate characteristic timescales.”

The eROSITA X-ray telescope was launched into space onboard the Spektr-RG mission on July 13, 2019. Its large collecting area and wide field of view are tailored for a deep all-sky survey in X-rays. Over the course of six months (December 2019 - June 2020) SRG/eROSITA has completed the first survey of the whole sky at energies 0.2-8 keV, significantly deeper than the only existing all-sky survey with an X-ray imaging telescope, performed by ROSAT in 1990 at energies 0.1-2.4 keV.

A preliminary analysis of the sky map from the first eROSITA all-sky survey indicates that more than one million X-ray point sources and about 20.000 extended sources are detected. This is comparable to, and indeed may exceed, the total number of X-ray sources known before eROSITA. About 80% of the point sources are distant Active Galactic Nuclei (AGN), but there are also about 20% coronally active stars in the Milky Way, including about 150 planet-hosting stars.

A paper describing the eROSITA instrument has been published recently (see here), and technical papers about the Operations, Cameras, Calibration and Background will be presented at the SPIE remote meeting taking place 14-18 December.