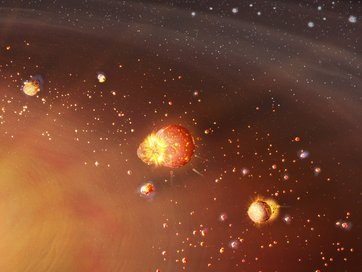 A new theory for the origin of the Solar System explains the meteorite record by forming planets in two distinct steps. The inner terrestrial protoplanets accreted early and were internally heated by strong radioactive decay. This degassed their volatiles and split the inner, dry from the outer, wet planetary population.

An international team of researchers from the University of Oxford, LMU Munich, ETH Zurich, BGI Bayreuth, and the University of Zurich discovered that a two-step formation process of the early Solar System can explain the chronology and split in volatile and isotopic content of the inner (like Earth or Mars) and outer (like Jupiter or Neptune) Solar System planetary populations. Their findings were published today in Science.

Recent complementary evidence from astronomical observations of protoplanetary disks and geochemical laboratory analyses of meteorites provide evidence that – unlike previously thought – planet formation starts nearly contemporaneously with the accretion of the protostar and takes place in isolated orbital regions. Isotopic and chemical fingerprints of planetary materials record the earliest evidence for planetary objects in the inner Solar System immediately after the onset of the Sun’s formation. The terrestrial planets accreted to inherit a relatively dry composition, whereas the outer planets, asteroids, and comets received substantially more volatiles during accretion.

The numerical experiments performed by the interdisciplinary team showed that the relative chronologies of early onset and protracted finish of accretion in the inner Solar System, and a later onset and more rapid accretion of the outer Solar System planets can be explained by two distinct formation epochs of planetesimals, the building blocks of the planets. Dr. Joanna Drążkowska from the University Observatory at LMU Munich and co-author of the study notes: ‘Recent observations of planet-forming disks showed that disk midplanes, where planets form, may have relatively low levels of turbulence. Under such conditions the interactions between the inward-drifting dust grains and water around the orbital location where it transitions from gas to ice phase (the snow line) can trigger an early formation burst of planetesimals in the inner Solar System and another one later and further out.’

The early split in formation epochs and sustained accretion of the outer Solar System planetary population offers a plausible explanation for the apparent dichotomy in supernovae-derived isotopes recorded in meteoritic materials. The two planetary populations were formed at different times and orbital locations. During later disk stages, material from the outer disk parts was incorporated into outer Solar System planets but did not substantially contribute to the inner terrestrial planets anymore. The initial accretion locations of the two planetesimal populations were each at orbits outside of the drifting water snow line. The simulations demonstrate that these initial orbits are consistent with the terrestrial protoplanets migrating to their present-day orbits within the anticipated lifetime of the solar protoplanetary disk. The comprehensive accretion framework proposed by the team makes a number of predictions for distinct stages of accretion, switching between accretion dominated by mutual collisions early-on to a phase dominated by accretion of smaller dust-grains, so-called pebbles.

The consequences for the accretion of asteroids and meteorite families and the underlying cause for the observed substructure in extrasolar circumstellar disks can be further examined by astronomical observations of planet-forming disks. These reveal details regarding the delivery channels of essential volatile elements that create the atmospheres and alter the surfaces of Earth-like planets. This opens new avenues to understand the origins of the Solar System within the context of the exoplanetary census across the galaxy.

This research was supported by funding from the Simons Collaboration on the Origins of Life, the Swiss National Science Foundation, and the European Research Council.