For their groundbreaking observations of solar neutrinos, with which the fusion reactions inside the sun could be experimentally proofed for the first time, the team of the Borexino collaboration receives the prestigious Giuseppe and Vanna Cocconi Prize. Every two years, the European Physical Society awards it to an outstanding discovery in astro-particle physics and cosmology of the past 15 years. TUM emeritus Prof. Franz von Feilitzsch, Prof. Lothar Oberauer and Prof. Stefan Schönert, all working at the Chair of Experimental Astroparticle Physics of the Technical University of Munich (TUM), made significant contributions to the measurements. 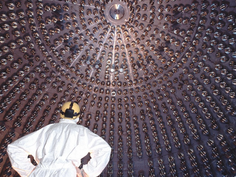 Inside the Borexino detector. More than 1000 meters of rock above the Laboratori Nazionali del Gran Sasso shields the experiment against a large part of the cosmic radiation, so that neutrinos from the sun can be measured here. Image: Borexino Collaboration

In 2018, after more than ten years of observing solar neutrinos, the Borexino experiment presented an overall study of the pp chain, the most important fusion process in the sun. The study confirmed for the first time the theoretical ideas about the energy production in our sun. Recently, after years of efforts, the Borexino collaboration was also able to observe the second fusion process, the CNO cycle. "Both measurements experimentally prove the hypothesis about how the sun works put forward in the 1930s," says Prof. Dr. Stefan Schönert,

pp chain: From hydrogen to helium

According to the physical model, around 99 percent of the solar energy results from a chain of fusion reactions that begins with four hydrogen nuclei and ends with the production of helium (proton-proton chain, pp chain). The only direct evidence of this process lies in the observation of the neutrinos that are emitted during these reactions.

The original scientific goal of Borexino was to measure neutrinos that are created in the pp chain when 7Be is fused. However, the observation of these low-energy solar neutrinos places high demands on the sensitivity and purity of the experiment.

"The key to the success of Borexino was that we managed to almost completely eliminate radioactive trace elements in the detector material," says Prof. Lothar Oberauer. “The Borexino collaboration has broken new ground here and achieved an unprecedented level of purity. The remaining background radiation could be identified by using sophisticated data analysis methods."

In this way, since the start in 2007, Borexino has managed to answer questions that went well beyond the initial goal. Most recently, the collaboration succeeded in demonstrating the CNO cycle, that had been proposed by Hans Bethe and Carl Friedrich von Weizsäcker in 1939. About one percent of the solar energy stems from this cycle.

"At first I would not have thought it possible that we would ever observe CNO neutrinos with Borexino, since the background signals appeared too high," says Stefan Schönert. Apart from solar neutrinos, Borexino was also able to measure neutrinos from inside the earth and answer questions about the earth's heat balance.

The European Physical Society now honors the scientists of the Borexino experiment with this year's Giuseppe and Vanna Cocconi Prize for their ‘groundbreaking observations of solar neutrinos from the pp and the CNO chains that provided unique and comprehensive tests of the sun as a nuclear fusion engine' as the committee states.

TUM Emeritus Prof. Franz von Feilitzsch, who was one of the experiment’s initiators 30 years ago, is very pleased: “It was a courageous decision by the Italian National Institute for Nuclear Physics to support such a challenging experiment on a permanent basis. We had a great cooperation with our European, Russian and American colleagues. The outstanding success of Borexino is not least due to a great number of young scientists.”

The online award ceremony will take place on 26 July 2021 during the high energy physics conference of the European Physical Society.

More information:
The Borexino experiment is carried out by 130 scientists from universities and scientific institutions in Italy, France, Germany, Great Britain, Ukraine, Russia, Poland and the USA. In Germany Forschungszentrum Jülich, University of Mainz, University of Hamburg as well as the Technical Universities of Dresden and Munich are involved.

In order to shield the experiments from cosmic background radiation the Borexino experiment is operated in the Gran Sasso underground laboratory which is carved into the rock deep under the mountains of the Italian Gran Sasso massif. The laboratory is part of the Italian National Institute for Nuclear Physics (INFN).