The Helmholtz Excellence Network “Munich Center for Plasma Astrophysics” headed by Professor Frank Jenko from the Max Planck Institute for Plasma Physics (IPP) and Principal Investigator of the Excellence Cluster Origins will commence its work on 1 May. The Center is being funded with around a million euros by the Helmholtz Association of German Research Centres. The main objective will be to contribute to the excellence cluster ORIGINS through studies relating to plasma astrophysics. 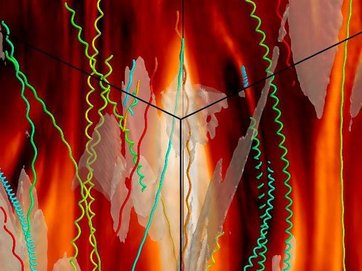 Understanding the evolution of the universe all the way from the Big Bang to the emergence of life – this is one of the biggest challenges in science. This is the focus of the excellence cluster ORIGINS, one of the successful candidates in what is now the third round of funding from the “excellence initiative” launched by the federal administration and federal states to promote research. In addition to Munich’s two universities, ORIGINS also counts the Max Planck Institutes for Astrophysics, Biochemistry, Extraterrestrial Physics, Physics and Plasma Physics, as well as further institutions in Munich and Garching among its participants.

The preliminary scientific work for IPP’s application for ORIGINS has already received over EUR 350,000 in support from the Helmholtz Association of German Research Centres, to which IPP is affiliated as an associated institute. With the Helmholtz Excellence Network “Munich Center for Plasma Astrophysics”, this work will enter a new phase from May 2019: the Helmholtz Association is providing around a million euros in funding for establishing and maintaining of a group of IPP scientists, which will contribute to ORIGINS by building on the preliminary work carried out so far.

Black holes and cosmic accelerators – plasma is everywhere
“Of the issues addressed by ORIGINS, IPP is particularly interested in investigating turbulent flows and high-energy particles in astrophysical plasmas,” says IPP scientist Professor Frank Jenko, who leads the Helmholtz Excellence Network. Although gravity plays a central role in astrophysics, it is not the sole driver of dynamics and self-organization in the universe. A large part of the energy is found in magnetic fields or cosmic radiation, and the overwhelming proportion of visible space is made up of turbulent plasma. Plasma turbulence is the key, for example, to understanding the glowing plasma disks around supermassive black holes – one of which was recently imaged for the first time in the star system M87. Plasmas are also behind the enormous speeds of cosmic ray particles with energies billions of times larger than achievable with the largest accelerators on earth. “Topics such as this fall within the fascinating area of plasma astrophysics,” says Frank Jenko: “Similar processes also play an important role in IPP’s fusion experiments, as do self-organization processes far from thermodynamic equilibrium, which are omnipresent both in space and in laboratory plasmas.”

In order to predict its behaviour, the complex plasma system can be described using fundamental nonlinear equations, which can usually only be solved using elaborate computer simulations. As a world leader in this area, IPP will contribute its expertise to ORIGINS and turn it to practical use in close collaboration with the field of astrophysics. Frank Jenko anticipates that this will help build numerous bridges between fusion experiments and the world of astrophysical observation: “The underlying plasma physical processes satisfy the same equations, whether they take place in the lab or in nature”.