The first stages of DNA evolution

Droplets of dew water on the primordial Earth could have been the first compartments to host the replication of short DNA molecules and their evolution. 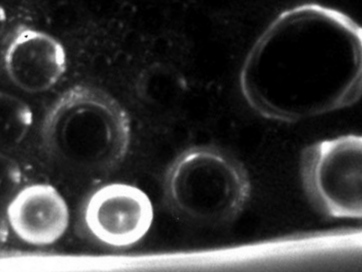 Scientists at the LMU investigated the first stages of molecular evolution inside dew water droplets, to mimic the early moments of the origin of life on Earth. Image: Braun / LMU

One fundamental question in the field of the Origin of Life is how the first molecules of DNA replicated and evolved on the primordial Earth, more than 4 billion years ago. Before the emergence of the first cells or any other form of compartmentalization, DNA and RNA molecules were likely dissolved into water ponds or into pores of rock filled with water and gas: ubiquitous conditions on a volcanic Earth. The high volcanic activity and the high temperatures were responsible for an atmosphere extremely rich in CO2. The concentration of carbon dioxide was about 25,000 times higher than today.

These are the conditions that ORIGINS PI Prof. Dieter Braun and his research group at the faculty of physics (LMU) have been recreating: artificial “thermal traps” to mimic millimetric pores of rock filled with water and gaseous CO2. Brauns team examined the replication and evolution of short DNA molecules under the most plausible primordial conditions.

The study highlights how local temperature differences can induce water cycles inside small pores of rock. The evaporation and condensation of water creates small dew droplets that acidify in the CO2-rich atmosphere. The dew droplets were seen acting as primordial, membrane-less compartments that contain and concentrate DNA. The periodic condensation and evaporation of the dew droplets force the DNA molecules into cycles of neutral-acidic pH, high-low salts and wet-dry states.

Such fluctuations have a strong influence on the replication of short DNA strands. “We have found that dew droplets of acidic water in a primordial CO2 atmosphere could enhance the replication of DNA molecules.” says Alan Ianeselli, PhD student and first author of the research. “Via salt, pH and wet-dry cycles, the dew promoted DNA mutations and recombinations, creating DNA strands up to 20 times longer than the initial ones.”

During the replication cycles in the dew droplets, the initially short DNA molecules heavily mutate and become progressively longer, driven by the peculiar features of the millimetric water cycles. The physical conditions of the dew also induce a selection process on the DNA strands, creating DNA molecules enriched in specific sequence fingerprints.

These findings point towards the dew droplets as the first primordial compartments capable of hosting the replication and evolution of DNA molecules. The lab of Prof. Dieter Braun plans to characterize the effects of such dew cycles on a variety of prebiotic chemical reactions, from the abiotic synthesis of nucleotides to the assembly of large RNA complexes capable of self-replication.