Elisa Resconi, ORIGINS PI and spokesperson of the SFB1258, receives an ERC Advanced Grant to build a new observatory for cosmic neutrinos. Within the next few years, Resconi and an international research team will develop and deploy the first three measurement strands of P-ONE, the Pacific Ocean Neutrino Experiment. The prototype of the first measurement string is currently being developed with extensive support from ORIGINS. 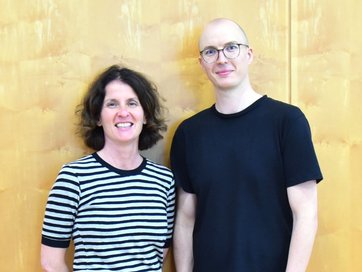 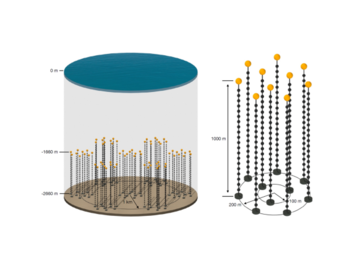 Neutrinos are produced in the trillions in the universe in a variety of high-energy events. After creation, they traverse space without leaving any traces or deviating from their trajectories. In this way, cosmic neutrinos testify, for example, to the massive processes at the verges of supermassive black holes - and other phenomena that burst our imagination.

Huge telescopes are needed to decipher the messages of cosmic neutrinos: volumes of several cubic kilometers of ice or water, instrumented with thousands of light sensors. The sensors capture the light trail created by the collision of a neutrino with a water molecule. To determine the energy and direction of the original particle, the path of the neutrino is reconstructed using detailed simulations, explains Prof. Tyce DeYoung of Michigan State University at the P-ONE meeting in Garching in May 2022.  He is very excited about the angular resolution which P-ONE shows in his simulations, allowing a more precise path reconstruction than currently available.

Prof. Elisa Resconi recently launched an initiative to develop a new observatory for cosmic neutrinos in the Pacific Ocean, the Pacific Ocean Neutrino Experiment (P-ONE). The prototype of a 1000-meter-long measuring line attached to the seafloor with 20 optical elements is currently being developed at the Technical University of Munich with the leading support of ORIGINS. In a next step, as part of the ERC project NEUTRINOSHOT, the first detector segment with three of these measuring ropes will be set up off the Canadian coast at a sea depth of 2.6 kilometers. It will demonstrate the functionality of P-ONE and measure the first neutrinos.

Christian Spannfellner, ORIGINS PhD student in the Resconi group, is involved in the development of P-ONE's optical modules. Above all, he says, it is important to adapt their design to the deep-sea environment and protect them from corrosion by the salt water. But, should anything happen, the modules are built in such a way that there are at least two alternative ways to register the rare luminous signals, adds Dr. Robert Halliday, also of Michigan State University, who is responsible for data acquisition.

So far, the IceCube neutrino detector at the South Pole - in which Elisa Resconi is involved - is the only telescope worldwide large enough to elicit the secrets of cosmic neutrinos. However, in order to really understand the high-energy events in the distant universe, further neutrino observatories and a global neutrino network are needed. However, high-volume underwater detectors such as P-ONE can not only precisely track the light traces of neutrinos. The bioluminescent glow of deep-sea organisms is also measured. A noise signal in astronomers' data, but a gateway to an unexplored world for biologists.