CO2 detected on an exoplanet for the first time

With the help of the James Webb Space Telescope (JWST), an international research team, including scientists from the University Observatory in Munich, has for the first time clearly identified carbon dioxide in the atmosphere of an exoplanet. The result provides important insights into the composition and formation of the planet and marks the start of a large observation program with the JWST. 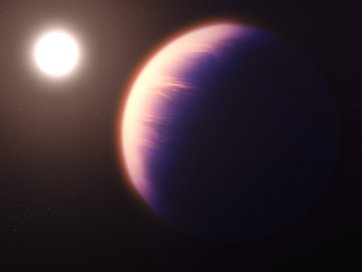 Artist's impression of the exoplanet WASP-39b. This illustration is based on indirect transit observations from JWST and other ground-based and space telescopes. Because the planet is very close to its star, it is very hot and likely in a tidally locked rotation with one side always facing the star. The new data show clear evidence of carbon dioxide in the atmosphere. Previous observations from Hubble, Spitzer, and other telescopes indicate also the presence of water vapour, sodium, and potassium. The planet likely has clouds and some form of weather. © NASA, ESA, CSA, Joseph Olmsted

The exoplanet WASP-39b is a hot gas giant orbiting a Sun-like star at a distance of 700 light-years from Earth. The planet has a mass only about a quarter that of Jupiter (comparable to Saturn), but is a good 1.3 times larger than Jupiter. The fact that it appears so bloated is partly due to its high temperature of about 900°C. In contrast to Saturn and Jupiter, the gas giants of our solar system, WASP-39b is very close to its star, at a distance of only about one eighth of the distance between the Sun and Mercury. A "year" on WASP-39b is correspondingly short -- not much more than four Earth days.

In 2011 WASP-39b was discovered using the transit method. Transit implies that the planet's orbit is inclined so that we see it from the side. Consequently, the planet passes directly in front of its parent star during each orbit, obscuring a part of the star each time. Thus, it darkens at regular intervals for the duration of the transit.

For the observations of WASP-39b, the scientists used the Near-Infrared Spectrograph (NIRSpec) of the James Webb Telescope, which splits the starlight into its wavelengths and thus uncovers the absorption lines. Previous observations of the exoplanet with other telescopes, including the Hubble and Spitzer Space Telescopes, have already found evidence of carbon dioxide (CO2), water vapor, sodium and potassium in its atmosphere. The unsurpassed infrared sensitivity of the JWST has now unequivocally confirmed the presence of carbon dioxide CO2. The detection of such a clear signal of the gas on WASP-39b also opens up the way to investigate CO2 in the atmospheres of smaller, terrestrial-size planets.

Rocky planets and gas planets are known to form in the gas and dust disks of young stars. Exactly how and where hot gas giants form which orbit close to their star, like WASP-39b, are still open questions. However, important clues are found in their atmospheres. “A gas giant that started out as a hot lump of gas may evolve close to its parent star and should also have a chemical composition like it," explains Dr Karan Molaverdikhani of the University Observatory of Munich. “Whereas a gas giant that grew from a kernel must do so at a distance from its star where ice-dust grains do not melt. Such planetary atmospheres are then enriched with more heavy elements like carbon," Molaverdikhani concludes. Thus, the high CO2 abundance in WASP-39b may indicate that the exoplanet began its existence as a pebble in the colder regions far from its star, and arrived at its current orbit only after traveling through its planetary system.

The NIRSpec observation of WASP-39b is just one part of a larger investigation that includes observations of the planet using multiple instruments, as well as observations of two other transiting planets. The investigation, which is part of the Early Release Science program, was designed to provide the exoplanet research community with robust Webb data as soon as possible.