This year, the ORIGINS Cluster PhD awards go to Riccardo Arcodia from the Max Planck Institute for Extraterrestrial Physics and Alan Ianeselli from the Ludwig Maximilian University of Munich for their excellent work. The ORIGINS PhD Awards were presented at a ceremony during the ORIGINS Science Week, which took place from November 28th to December 1st, 2022 at Seeon Monastery. 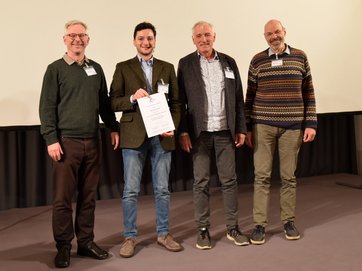 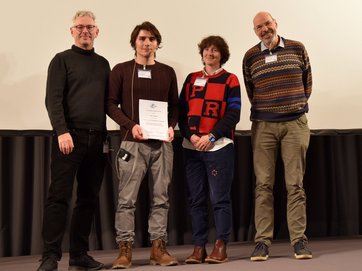 The ORIGINS PhD Awards for outstanding doctoral theses in the field of astrophysics, nuclear physics, particle physics and biophysics are presented once a year. This year, the selection committee, our Cluster Emeriti, was particularly impressed by two works: The dissertation “Accretion onto black holes across the mass scale” by Dr. Riccardo Arcodia and the dissertation ''Hadean water-dew cycles drive the evolution of DNA and protocells'' Dr. Alan Ianeselli.

In his dissertation, Riccardo Arcodia studied the physics of gas that moves in the immediate vicinity of black holes. He modeled the hitherto poorly understood interplay between the cool accretion disk, which glows in UV and optical light, and the overlying, hot X-ray-emitting corona. He showed that the disk and corona are magnetically coupled, and that this model works for both supermassive black holes as well as the much lighter, stellar black holes in X-ray binaries.

Moreover, Riccardo Arcodia discovered quasi-periodic flares (QPE) from two otherwise dormant galaxies with the X-ray satellite eROSITA and was able to explain this with an encounter of the central black hole with another compact object. "The result about the QPEs is spectacular and already has a major impact, namely a highly cited article in the journal Nature," emphasized the selection committee.

Building blocks of life in dewdrops

Alan Ianeselli developed a laboratory experiment that enabled him to recreate water cycles as they occurred on the young Earth four billion years ago in the so-called Hadean epoch. In doing so, he discovered that dew droplets, which are formed as a result of temperature gradients, cause local fluctuations in the salinity of a pore that is partially filled with water. He could also show that these ionic strength changes are large enough to separate double-stranded DNA, which is a prerequisite for prebiotic replication chemistry.

To show that this dew-driven strand separation could enable molecular evolution, he accelerated otherwise intolerably slow reactions involving polymerases (enzymes that make the nucleic acids of DNA or RNA). In doing so, Alan Ianeselli discovered that long strands of DNA accumulated at the air-water interface and indeed evolved into sequences of repetitive and structured nucleotide compositions. "The radiance of his research," emphasized the selection committee, "already extends far beyond the research community and into the public debate."