Great honour for ORIGINS scientist Volker Springel: the director at the Max Planck Institute for Astronomy is being awarded the 2020 Gruber Cosmology Prize for his defining contributions to cosmological simulations. Springel shares the $500,000 prize with Lars Hernquist of the Harvard-Smithsonian Center for Astrophysics. The researchers have developed methods to test existing theories about the formation of structures at every scale from stars to galaxies to the universe itself. Springel and Hernquist developed numerical algorithms and community codes which are used by many other researchers today. 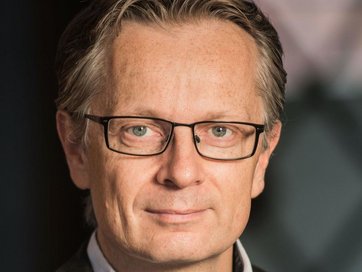 Prizewinning cosmologist: Volker Springel from the MPI for Astrophysics

Using computational simulations, Volker Springel and Lars Hernquist have also tested theories relating to cold dark matter and dark energy. The former is invisible and comprises roughly four-fifths of the universe’s matter; the latter is a mysterious force causing an accelerated late-time expansion of the universe. In addition, the researchers also investigate how the concert of the two unknowns with ordinary baryons give rise to today’s visible structures.

Hernquist and Springel have discovered that simulations are necessary to incorporate so-called feedback— the portion of the outflow of material (such as gas) and energy that feeds back into evolutionary processes. In 2005, working with collaborator Tiziana Di Matteo, they demonstrated that black-hole feedback determines the growth relationship between supermassive black holes and their host galaxies.

Feedback is now a standard component of cosmological simulations at virtually every scale, from stellar evolution over dark matter physics that determines the distribution of superclusters of galaxies into web-like tendrils.

The Gruber Prize also recognizes that Springel and Hernquist have written several codes that cosmologists consider indispensable. For example, in 2001 Springel introduced the programme GADGET, together with Naoki Yoshida and Simon White, which he used in creating the Millennium Simulation – the first dark-matter-only simulation to encompass a representative volume of the universe. The resulting series of images provided a vivid and compelling set of images in the form of a “cosmic web.”

The Max Planck researcher also led the creation of AREPO, a moving mesh simulation code which he and Hernquist subsequently used in the creation of Illustris. This largest astrophysical simulation series in the world presents the development of the universe in unparalleled detail. At the same time, it makes it possible to reproduce the properties of the universe from the largest structures to individual galaxies over almost the entire cosmic history.

In 2018, the international Illustris team released an update of the simulation called IllustrisTNG ("Illustris The Next Generation"). The researchers used hydrodynamic simulations to illustrate the large-scale structure of galaxies for the first time. And they took into account physical processes such as the amplification of cosmic magnetic fields, the production of heavy elements in supernova explosions or the injection of kinetic energy by gas emitted by black holes.

The German Gauss Centre for Supercomputing allowed the realisation of the two main computations TNG100 and TNG300, generating a total of more than 500 terabytes of simulation data. The scientists will continue to work on the evaluation of this data for years to come. With their work, Volker Springel and Lars Hernquist have given cosmology an important impetus and a new, exciting direction

The Gruber Cosmology Prize honours leading figures from the fields of cosmology, genetics, and neuroscience whose pioneering discoveries lead to fundamental advances in our understanding of the universe. The Gruber International Prize Program honors individuals in the fields of Cosmology, Genetics and Neuroscience, whose groundbreaking work provides new models that inspire and enable fundamental shifts in knowledge and culture. The Selection Advisory Boards choose individuals whose contributions in their respective fields advance our knowledge and potentially have a profound impact on our lives. The Gruber Foundation was established in 1993 by the late Peter Gruber and his wife Patricia Gruber. The Foundation began its International Prize Program in 2000, with the inaugural Cosmology Prize.