Dr. Daniel Grošelj from Max Planck Institute for Plasma Physics (IPP) at Garching was today awarded the Otto Hahn Medal. With this award, the Max Planck Society honors young scientists every year for outstanding achievements, mostly in connection with their doctoral thesis. At the end of 2019 Daniel Grošelj already received the ORIGINS PhD Award for his outstanding doctoral thesis in the field of astrophysical plasma physics. 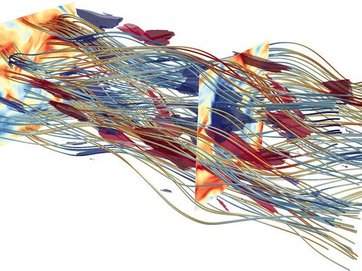 An area about 300 kilometres wide in the solar wind is reproduced by this three-dimensional supercomputer simulation of astrophysical plasma turbulence. Featured are the lines of the magnetic field and the (color-coded) fluctuation of the electron density. Image: Daniel Grošelj, IPP

Currently Daniel Grošelj is a postdoctoral fellow and scholarship holder at Columbia University in New York, USA. He was awarded the Otto Hahn Medal for his “ground-breaking investigations into the nature of dissipative processes in astrophysical turbulence”. The focus is on the magnetized and turbulent plasma that fills space. It contains structures of various types and sizes; waves of various kinds move through the plasma. Daniel Grošelj investigated the dissipative processes in which the energy of a directed motion, such as a wave, is dispersed into many small amounts of energy of significantly less-ordered motions – small vortices – and finally heats up the individual plasma particles. Two fundamental questions are controversially discussed in this context: What plasma waves play a role in dissipation? And: Should turbulence be regarded as the result of weakly interacting waves or do the turbulent structures have nothing to do with the waves and dominate them completely?

Daniel Grošelj has made ground-breaking contributions to this in a series of studies. Using computational simulations on some of the world's most powerful supercomputers and innovative techniques for analysing satellite data of the solar wind, he was able to answer both questions. On the first question he provided strong arguments in favour of so-called kinetic Alfvén waves. His answer to the second question brings together the two previously opposing views in an unexpected way: The turbulent structures in the space plasma consist of spatially localized wave packets.

The Otto Hahn Medal is endowed with prize money of 7,500 euros. The Max Planck Society awards the prize annually to up to 30 particularly talented young scientists.