Tailwind for the search for rare particle decays in the Belle II experiment: The SuperKEKB accelerator ring has now achieved the highest luminosity ever measured. The electron-positron accelerator beats not only its predecessor KEKB but also the Large Hadron Collider (LHC) at CERN. This has just been announced by the Japanese research center KEK, the operator of the accelerator. 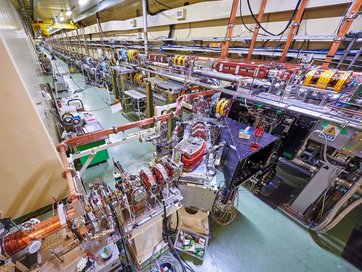 Part of the accelerator ring at KEK. Image: KEK / N.Toge

In SuperKEKB, electrons and positrons are accelerated to high energies and collided inside the Belle II detector. Scientists want to find out more about what causes the different behavior of matter and anti-matter in the universe. The German Belle II groups, in which the excellence cluster ORIGINS with the Ludwig-Maximilians-Universität Munich, the Technical University Munich and the Max Planck Institute for Physics is involved, developed the innermost detector in Belle II.

Luminosity plays a key role here. It indicates how many particles are colliding per second and square centimeter. It is thus an important factor for the number of collisions that can be evaluated with the Belle II detector. The more measurement data, the higher the probability of finding rare decays.

On 20 June 2020, the value was 2.4 × 1034 cm−2s−1. But this is only the beginning. In the next few years, the luminosity will continue to increase to 40-fold the current record. The scientists have come up with a number of technical innovations.

Target: Increasing the collision rate
In order to obtain a high luminosity, scientists can optimize two parameters: the density of the counter-rotating beams of electrons and positrons and the particle current, i.e. the number of particles per beam.

Italian physicist Pantaleo Raimondi developed the “nano-beam method”, which allows the particle beam to be focused to a 10 micrometer wide and 50 nanometer high beam. For comparison: Corona viruses are 120-160 nanometers in diameter. The current world record could be already achieved with a 20 micrometer wide and 220 high beam. The particle current can also be further improved by a factor of 4 to 5.

Effects on the Belle II experiment
The electron and positron beams meet in the center of the Belle II detector. The physicists and engineers in the Belle II consortium use it to study particles created in the collision – essentially B mesons, charm mesons, and tau leptons(*) as well as their corresponding antiparticles.

The behavior of these particles is largely described in the Standard Model. However, the Standard Model cannot explain all observable phenomena: for example, dark matter or why there is matter but hardly any antimatter in the universe. The researchers hope to find the answers in signals from rare decay processes. The high-performance SuperKEKB machine makes it possible to record and analyze more of these events.

Over the next ten years, Belle II is expected to record 50 times more collisions than the previous Belle detector. The physicists can then use the experiment to evaluate 50 billion B meson pairs and a similarly high number of charm mesons and tau leptons. This will allow them to delve deeper into the mysteries of the universe than ever before.

(*) Mesons consist of two quarks, elementary particles that also form the protons and neutrons in the nucleus of atoms. B mesons, for example consist of an up or a down quark and an anti-B quark: https://en.wikipedia.org/wiki/B_meson

The tau lepton (or tauon) is a heavy relative of the electron: https://en.wikipedia.org/wiki/Lepton

The German working groups in the Belle II experiment are funded by the following institutions and programs:

Graphic: The development of the luminosity of the SuperKEK since autumn 2019