The “IceCube” neutrino observatory deep in the ice of the South Pole has already brought spectacular new insights into cosmic incidents of extremely high energies. In order to investigate the cosmic origins of elementary particles with even higher energies, Prof. Elisa Resconi from the Technical University of Munich (TUM) has now started an international initiative to build a neutrino telescope several cubic kilometers in size in the northeastern Pacific. 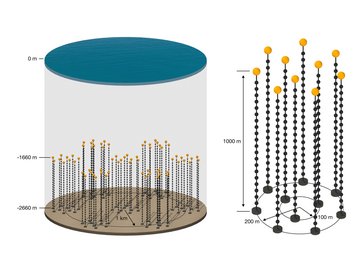 Design of the planned P-ONE neutrino telescope in the Pacific Ocean (left). The telescope will have a modular structure and consist of seven identical detector segments (right), the first of which will be installed in 2023/24. Image credit: E. Resconi / TUM 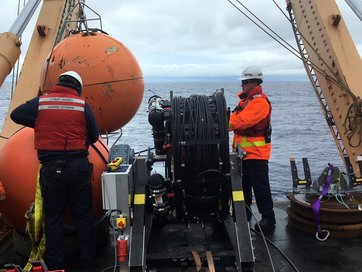 Astronomers observe the light that comes to us from distant celestial objects to explore the Universe. However, light does not tell us much about the highest energy events beyond our Galaxy, such as the jets of active galactic nuclei, gamma-ray bursts or supernovae, because photons in the upper gamma-ray range lose their extreme energies on their long way through the Universe through interaction with other particles.

Just like light, neutrinos traverse space at the speed of light (almost) but interact extremely rarely with other particles. They maintain their energy and direction, which makes them unique messengers of the highest energy universe.

Since 2013, when the IceCube Neutrino Observatory detected extragalactic neutrinos for the first time, astrophysicists have been striving to understand from which cosmic sources they come and which physical mechanism has accelerated them to such extreme energies.

However, to solve the puzzle, more detectors with even larger volumes than that of the cubic-kilometre sized IceCube Observatory are required. Because neutrinos cannot be observed directly, only through Cherenkov radiation, the detectors must be located in ice or in water.

Initiative for a new neutrino telescope in the Pacific

Prof. Elisa Resconi, spokesperson of the Collaborative Research Center 1258 and Liesel-Beckmann Chair for Experimental Physics with Cosmic Particles at TUM, has now started an international initiative for a new neutrino telescope located in the Pacific Ocean off the coast of Canada: the Pacific Ocean Neutrino Experiment (P-ONE).

For that purpose, Resconi has partnered with a facility of the University of Victoria, Ocean Networks Canada (ONC), one of the world's largest and most advanced cabled ocean observatories.

Ideal conditions for a neutrino observatory

The ONC network node in the Cascadia basin at a depth of 2660 meters was selected for P-ONE. The extensive abyssal plain offers ideal conditions for a neutrino observatory spanning several cubic kilometres.

In summer 2018, ONC anchored a first pathfinder experiment in the Cascadia basin: the STRAW (Strings for Absorption length in water) experiment, two 140-meter-long strings equipped with light emitters and sensors to determine the attenuation of light in the ocean water, a parameter crucial for the design of P-ONE. In September 2020, STRAW-b will be installed, a 500 m steel cable with additional detectors. Both experiments were developed and built by Resconi’s research group at the TUM Physics Department.

The first segment of P-ONE, the Pacific Ocean Neutrino Explorer, a ring with seven 1000-meter-long strings with 20 detectors each, is planned to be installed in ONC’s marine operation season in 2023/24 in collaboration with various Canadian universities.

“Astrophysical neutrinos have unlocked new potential for significantly advancing our knowledge of the extreme universe,” says Darren Grant, professor at the Michigan State University (USA), and spokesperson of the IceCube collaboration. “P-ONE represents a unique opportunity to demonstrate large-scale neutrino detector deployment in the deep ocean, a critical step towards reaching the goal of a globally connected neutrino observatory that would provide peak all-sky sensitivity to these ideal cosmic messengers.”

Elisa Resconi anticipates P-ONE with its seven segments to be completed by the end of the decade. “The experiment will then be perfectly equipped to uncover the provenance of the extragalactic neutrinos,” says Resconi, “but what’s more, high-energy neutrinos also hold the potential to reveal the nature of dark matter.”

The project receives support from Ocean Networks Canada, an initiative of the University of Victoria funded in part by the Canada Foundation for Innovation. This work is funded by the German Research Foundation (DFG) through grant SFB 1258 “Neutrinos and Dark Matter in Astro- and Particle Physics” and the cluster of excellence “ORIGINS: From the Origin of the Universe to the First Building Blocks of Life ”.

A special feature of the modules: They contain works of art by young international artists who create a connection between the earth and the deep sea and thus turn the pathfinder experiment into a unique underwater exhibition.