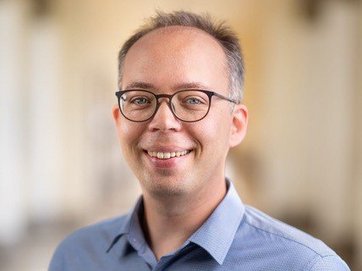 ORIGINS scientist Til Birnstiel is receiving the 2020 Astrophysical Software Award of the German Astronomical Society for the software he developed for modelling the temporal and spatial evolution of dust in protoplanetary disks. Young stars and the disks around them are built up from interstellar matter which initially contains only very small, at most micrometer-sized, dust particles. Til Birnstiel has written codes describing the mechanisms which lead to the growth of grains over several orders of magnitude in mass and to study how they are distributed and transported in the disk. His simulations of the dynamics and evolution of solid particles in disks have a vast impact on the understanding of planet formation. He and his team succeeded in developing the most widely used software codes in the field, which reflect not only the complex underlying physics but are also flexible enough to be applicable for the interpretation of observational data. Til Birnstiel did his doctorate in 2010 at the MPIA in Heidelberg. After being a postdoctoral researcher at the Excellence Cluster Universe at LMU Munich, the Harvard-Smithsonian Center for Astrophysics in Cambridge and the MPIA in Heidelberg, he accepted the offer for a professorship for theoretical astrophysics at the LMU Munich, where he has been leading an ERC funded research group on planet formation since 2017.

The ORIGINS Cluster congratulates on this award.