At the General Meeting of the Royal Swedish Academy of Sciences on 9 September 2020, Linda Tacconi from the Max Planck Institute for Extraterrestrial Physics was elected foreign member of the class for astronomy and space science. This honour recognises her exceptional research in millimetre astronomy and her efforts to promote European astronomy. 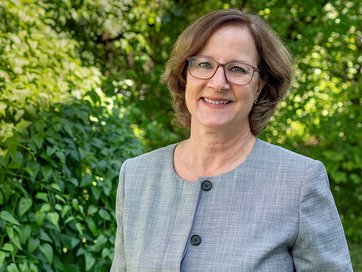 The Royal Swedish Academy of Sciences was founded in 1739 and is an independent organisation, whose overall objective is to promote the sciences and strengthen their influence in society. It enhances the status of science in society by drawing attention to key social issues, examining them in scientific terms and communicating the results, and joins in cooperation on global issues, with the aim of being an international scientific proponent of sustainable development.

Linda Tacconi is a senior astronomer at the Max Planck Institute for Extraterrestrial Physics, where she works with millimetre and submillimetre interferometry as well as infrared high resolution imaging spectroscopy to find out more about galaxies, the black holes at their centres and star formation. After her PhD at the University of Massachusetts, Amherst, Massachusetts, USA, Linda Tacconi worked at the Netherlands Foundation for Research in Astronomy, Dwingeloo, before she moved to the MPE in 1991. She has been or is chairing several international committees to maximize the scientific return from telescopes such as ALMA, IRAM and the VLT.

Original communication by the Max-Planck-Insitute for Extraterrestrial Physics

Announcement by the Royal Swedish Academy of Sciences