From COMPASS to AMBER: exploring fundamental properties of hadrons 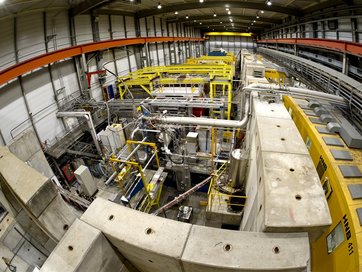 The research board of CERN, the world’s largest research organisation for fundamental science, has approved the scientific program and the erection of the COMPASS++/AMBER experiment at the CERN SPS. The approval comprises phase I of the research proposal which addresses three major research topics: (i) the charge radius of the proton using high-energy muons, (ii) the reaction rates for antiprotons by high-energy protons, which is relevant for antimatter investigations in cosmic rays, and (iii) the dissection of the dynamics of the constituents of the pion, a composite particle that is key to understanding the generation of the visible mass in the universe.

The new experiment, dubbed formally as NA66, is based on the COMPASS detector system operating at CERN since 2002. It relies on a number of new installations, such as a high-pressure TPC detector filled with hydrogen, a new high-end data acquisition system, thin scintillating-fibre arrays and silicon pixel detectors. The research group of E18 at TUM has contributed significantly to the research program of the proton charge radius measurement and will add innovative instrumentation (DAQ, fibres) to the apparatus. Additionally, the E18 group was strongly involved in formulating the full science proposal and its presentation to scientific referees and the decision-making bodies of CERN. First test measurements will be carried out at the end of 2021. The programme will run until the end of 2025.