Origin of life: The chicken-and-the-egg problem

Physicists has shown that slight alterations in transfer-RNA molecules (tRNAs) allow them to self-assemble into a functional unit that can replicate information exponentially. tRNAs are key elements in the evolution of early life-forms. 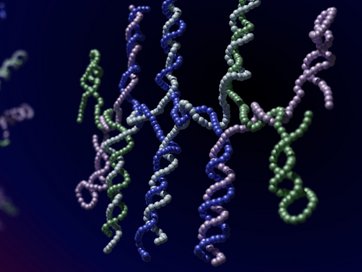 A replicator made of tRNA-like sequences. Image: Kudella / LMU

Life as we know it is based on a complex network of interactions, which take place at microscopic scales in biological cells, and involve thousands of distinct molecular species. In our bodies, one fundamental process is repeated countless times every day. In an operation known as replication, proteins duplicate the genetic information encoded in the DNA molecules stored in the cell nucleus – before distributing them equally to the two daughter cells during cell division. The information is then selectively copied (‘transcribed’) into what are called messenger RNA molecules (mRNAs), which direct the synthesis of the many different proteins required by the cell type concerned. A second type of RNA – transfer RNA (tRNA) – plays a central role in the ‘translation’ of mRNAs into proteins. Transfer RNAs act as intermediaries between mRNAs and proteins: they ensure that the amino-acid subunits of which each particular protein consists are put together in the sequence specified by the corresponding mRNA.

How could such a complex interplay between DNA replication and the translation of mRNAs into proteins have arisen when living systems first evolved on the early Earth? We have here a classical example of the chicken-and-the-egg problem: Proteins are required for transcription of the genetic information, but their synthesis itself depends on transcription.

LMU physicists led by Prof. Dr. Dieter Braun, principal investigator of the ORIGINS cluster, have now demonstrated how this conundrum could have been resolved. They have shown that minor modifications in the structures of modern tRNA molecules permit them to autonomously interact to form a kind of replication module, which is capable of exponentially replicating information. This finding implies that tRNAs – the key intermediaries between transcription and translation in modern cells – could also have been the crucial link between replication and translation in the earliest living systems. It could therefore provide a neat solution to the question of which came first – genetic information or proteins?

Strikingly, in terms of their sequences and overall structure, tRNAs are highly conserved in all three domains of life, i.e. the unicellular Archaea and Bacteria (which lack a cell nucleus) and the Eukaryota (organisms whose cells contain a true nucleus). This fact in itself suggests that tRNAs are among the most ancient molecules in the biosphere.

Like the later steps in the evolution of life, the evolution of replication and translation – and the complex relationship between them – was not the result of a sudden single step. It is better understood as the culmination of an evolutionary journey. “Fundamental phenomena such as self-replication, autocatalysis, self-organization and compartmentalization are likely to have played important roles in these developments,” says Dieter Braun. “And on a more general note, such physical and chemical processes are wholly dependent on the availability of environments that provide non-equilibrium conditions.”

In their experiments, Braun and his colleagues used a set of reciprocally complementary DNA strands modeled on the characteristic form of modern tRNAs. Each was made up of two ‘hairpins’ (so called because each strand could partially pair with itself and form an elongated loop structure), separated by an informational sequence in the middle. Eight such strands can interact via complementary base-pairing to form a complex. Depending on the pairing patterns dictated by the central informational regions, this complex was able to encode a 4-digit binary code.

A step closer to the reconstruction of the origin of life

During the copying process, complementary strands (drawn from the pool of molecules) pair up with the informational segment of the template strands. In the course of time, the adjacent hairpins of these strands also pair up to form a stable backbone, and temperature oscillations continue to drive the amplification process. If the temperature is increased for a brief period, the template strands are separated from the newly formed replicate, and both can then serve as template strands in the next round of replication.

The team was able to show that the system is capable of exponential replication. This is an important finding, as it shows that the replication mechanism is particularly resistant to collapse owing to the accumulation of errors. The fact that the structure of the replicator complex itself resembles that of modern tRNAs suggests that early forms of tRNA could have participated in molecular replication processes, before tRNA molecules assumed their modern role in the translation of messenger RNA sequences into proteins. “This link between replication and translation in an early evolutionary scenario could provide a solution to the chicken-and-the-egg problem,” says Alexandra Kühnlein. It could also account for the characteristic form of proto-tRNAs, and elucidate the role of tRNAs before they were co-opted for use in translation.

Laboratory research on the origin of life and the emergence of Darwinian evolution at the level of chemical polymers also has implications for the future of biotechnology. “Our investigations of early forms of molecular replication and our discovery of a link between replication and translation brings us a step closer to the reconstruction of the origin of life,” Braun concludes.

Original publication: tRNA sequences can assemble into a replicator