The European Astronomical Society (EAS) awards the 2021 Tycho Brahe Medal to ORIGINS Scientist Dr. Frank Eisenhauer (Max Planck Institute for Extraterrestrial Physics, MPE) for his leadership of the SINFONI and GRAVITY instruments on the ESO VLT, which revolutionized the study of exoplanets, supermassive black holes, and star forming galaxies in the early universe. 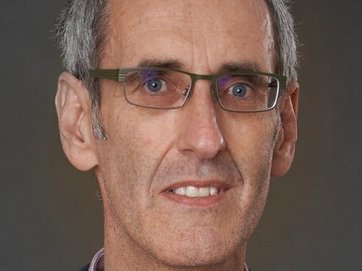 Both SINFONI and GRAVITY are part of the instrument suite employed in the discovery and characterization of the Galactic Center Black Hole, which led to the Nobel Prize 2020 in Physics.

SINFONI revolutionized the spectroscopy of stars close to the Galactic Center black hole and the kinematic studies of galaxies at the peak of galaxy formation a few billion years after the Big Bang. It consists of an integral field spectrometer coupled to an adaptive optics system. Integral filed spectroscopy is a technique to simultaneously record an image and the spectrum for every pixel of the image, and adaptive optics corrects the blurring due to the Earth’s atmosphere. The development of SINFONI catapulted integral-field units to the leading design choice of imaging spectroscopy for all large telescopes, including also the ESO-ELT, a 40m-class telescope currently under construction.

The next major technological breakthrough came with GRAVITY, which combines the light of all four VLT telescopes interferometrically. This allows astronomers to use the four telescopes simultaneously as a virtual 130m telescope achieving milli-arcsecond resolution – sharp enough to detect houses on the moon, if there were any.

With the Tycho Brahe Medal, which is awarded in recognition of the development or exploitation of European instruments or major discoveries based largely on such instruments, the EAS recognizes that Frank Eisenhauer was the leader and driver in the design and development of these complex and innovative instruments and has been a key figure in their scientific exploitation.

Frank Eisenhauer studied physics at the Technical University of Munich (TUM) and obtained his PhD in 1998 from the Ludwig Maximilian University Munich. He is currently a Senior Research Scientist at MPE and Adjunct Teaching Professor at TUM. From 1998 to 2004 Dr. Eisenhauer was leading the development on the world’s first adaptive optics assisted integral field spectrometer on an 8m-class telescope, SINFONI. He then became the leader of the GRAVITY instrument to combine the light from the four 8m VLT telescopes, which is operated at the VLT since 2016. The instrument is currently further developed into GRAVITY+, enhancing its capabilities and sensitivity. The Ieader of this project is again Dr. Eisenhauer.

Detailed press release of the MPE