Because of their extremely small mass, neutrinos play a key role in cosmology and particle physics. After evaluation of the first measurement results in the Karlsruhe Tritium Neutrino Experiment (KATRIN), it is now clear: The previously unknown mass of the neutrinos must be less than 1 electron volt. This result is more accurate than previous measurements and raises hopes of discovering new neutrino properties. 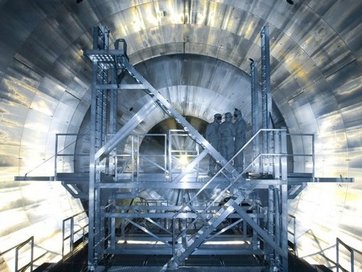 Apart from photons, the particles of light, neutrinos are the most common particles in the universe. The discovery of neutrino-oscillation two decades ago proved that – contrary to previous expectations – they have a negligible mass other than zero. The lightweight particles thus play a central role in the formation of large-scale structures in the cosmos.

Also in the world of elementary particles, the smallest building blocks of the universe, their extremely small mass is of importance: it suggests new physics beyond common models. Over the next few years, the international KATRIN experiment at the Karlsruhe Institute of Technology (KIT), will determine the mass of these fascinating neutrinos with unprecedented sensitivity.

In spring 2019, the 150-strong KATRIN team put neutrinos on the scales for the first time – figuratively speaking, of course. The scientists circulated highly pure tritium gas (1) in the source for several weeks and recorded the first energy spectra of electrons from the tritium decay. The international team then set to work to derive the first neutrino mass from the data recorded.

Covert investigations lead to the goal
A central task was assigned to Thierry Lasserre (CEA and Max Planck Institute for Physics/TUM) as analysis coordinator: “Our three international analysis teams deliberately worked separately from each other to guarantee truly independent results. In doing so, special emphasis was put on securing that no team member was able to prematurely deduce the neutrino mass result before completion of the final analysis step.” On the evening of 18 July 2019, all data were released.

Thus, the programs that started simultaneously could compare the measurement data with the model expectation overnight and scan for the characteristic signature of the neutrino mass. All three groups reported identical results, which limited the neutrino mass to a value of less than 1 electron volt (eV). This means that KATRIN already has the world’s highest neutrino mass accuracy after an initial brief measurement phase.

Susanne Mertens, Principal Investigator of the Excellence Cluster Origins and leader of the group at the Max Planck Institute of Physics, coordinated one of the main analyses of the first neutrino mass data. The analysis strategy newly-developed by the MPP group was chosen as main result of this measurement campaign. Besides the final data analysis her group contributed significantly to the characterization of the background and the calibration of tritium source. “I’m so proud of my team who did a fantastic job to realize this challenging data analysis.”

How much energy is left for the neutrino?
The analyses now published (2) use a long-established principle for the direct determination of the neutrino mass: During the radioactive decay of tritium, the resulting electron and an (electron) neutrino share the released energy of 18.6 kiloelectron volts. In extremely rare cases, the electron receives practically the entire energy. For the neutrino, only a tiny fraction of it remains but at least – according to Einstein – the amount E = mc² of its rest mass.

Of the approximately 25 billion electrons released per second during tritium decay, the KATRIN scientists have investigated only a small sub-set: They filtered out around 2 million electrons with the appropriate energy spectrum in order to determine the neutrino mass.

(1) Tritium is also referred to as heavy hydrogen. In contrast to the usual hydrogen, the nucleus of which consists of a proton, radioactive tritium has one proton and two neutrons.

(2) The analyses were presented at the TAUP symposium in Toyama, Japan. They were also submitted for publication in a renowned specialist journal.