The LHCb collaboration at CERN, and instrumentally our new ORIGINS Fellow Mikhail Mikhasenko, previously a Fellow at CERN, has discovered a new class of hadronic matter, double-heavy tetraquarks, labelled as Tcc+, with overwhelming statistical significance. In fact, this is the longest-living exotic particle ever observed, and the first to contain two heavy quarks and two light antiquarks. 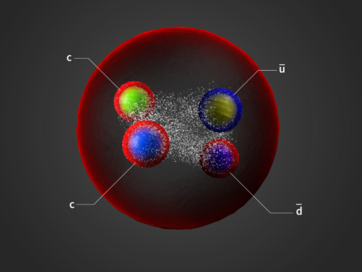 An artist’s impression of Tcc+, a tetraquark composed of two charm quarks and an up and a down antiquark. Image: CERN

Several possibilities for the internal structure of the state have been proposed. The quarks could be tightly bound by gluons as in the proton and neutron, as illustrated in the figure – or they could also be loosely bound in nuclei-like structure. There is also the possibility that these two mechanisms are found in superposition.

Assessing the significance of the discovery, ORIGINS Fellow Mikhail Mikhasenko remarks: “The exotic candidates observed so far always had an alternative explanation. Therefore, the present discovery sets a milestone as an unambiguous indication of the matter formations beyond the conventional states.”

Double-heavy tetraquarks were first anticipated almost 40 years ago and have been actively discussed ever since.  Such particles may decay by transforming into a pair of mesons, each made up of one of the heavy quarks and one of the light antiquarks. For Tcc+, the masses of the initial and final states are very close, leading to its unusual lifetime, impressively large in the world of hadrons and unprecedented for the exotics.

This is not only a landmark discovery in its own right, but paves the way for a search for related particles. The “beautiful cousin” containing two bottom quarks instead of two charm quarks is especially sought-after, as according to calculations, its mass should be smaller than the sum of the masses of the pair of mesons it decays to. This would make the decay not only unlikely but actually forbidden, leading to even more stability with respect to the strong and electromagnetic interactions. As Mikhail Mikhasenko adds: “Stable or almost stable exotic hadrons are the dream of the researchers studying exotic phenomena of QCD.”