The ORIGINS Cluster's doctoral prizes were awarded this year to Theo Glauch and Dimitar Mihaylov, both from the Technical University of Munich, for their excellent PhD theses. The awards were presented ceremoniously during the Science Week of the ORIGINS Cluster at the Irsee Monastery, which took place from 22 to 25 November 2021. 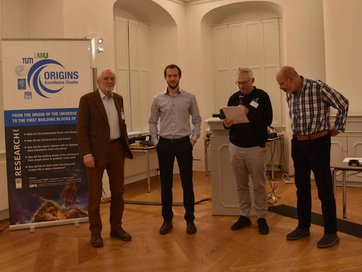 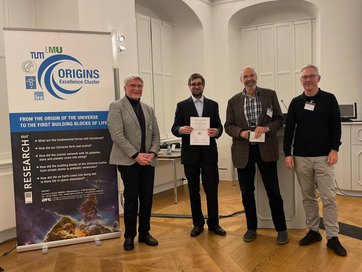 The ORIGINS PhD Awards for outstanding doctoral theses in the field of astrophysics, nuclear and particle physics as well as biophysics are presented once a year. This year, Dr. Theo Glauch with his dissertation “The Origin of High-Energy Cosmic Particles: IceCube Neutrinos and the Blazar Case. Probing multi-messenger data by combining techniques from astrophysics, machine learning, and statistics. " and Dr. Dimitar Mihaylov with his dissertation “Analysis techniques for femtoscopy and correlation studies in small collision systems and their applications to the investigation of p-Λ and Λ-Λ interactions with ALICE” convinced the selection committee made up of ten distinguished Cluster Emeriti.

Tracing the origin of cosmic rays

Theo Glauch developed an application based on artificial neural networks that reconstructs and classifies data from high-energy neutrinos from the IceCube detector at the South Pole. His improved selection procedure has already led to new discoveries: some of the neutrino measurements could be associated with active galactic nuclei, including the Blazar 3HSP J095507.9 + 355101.

The origin and acceleration mechanism of cosmic neutrinos are still unknown. However, as soon as a high-energy cosmic neutrino interacts with a water molecule in the Antarctic ice (an extremely rare process), a relativistic muon is created that can be detected as a short blue flash (Cherenkov radiation). The reconstruction of the energy and direction of the original particle with the help of artificial neural networks is a "groundbreaking innovation that has increased the efficiency and the discovery potential of the IceCube experiment," emphasized the selection committee in its decision.

In his dissertation, Dimitar Mihaylov dealt with a new method for analyzing data from the ALICE experiment at CERN and the associated theoretical model. This describes the interactions and correlations between hyperons and nucleons. Hyperons are subatomic particles that contain at least one strange quark, while nucleons are protons and neutrons made of up and down quarks.

The "Correlation Analysis Tool to solve the Schrödinger equation (CATS)" developed by Mihaylov is based on the technique of femtoscopy and enables the calculation of the relative wave function and prediction of the correlation function of interacting particles. This allows to study the hyperons and nucleons produced in the Large Hadron Collider (LHC) at CERN.

Hyperons can not only be produced in the LHC, but may also occur in nature when the particle density exceeds a certain limit. This could be the case in the interiors of neutron stars. The properties of neutron stars are given by the equation of state of the dense matter in their nucleus. A better theoretical understanding of the interactions between hyperons and nucleons thus allows a more precise description of the processes in neutron stars. In its evaluation, the selection committee particularly emphasized the "important role of Dimitar Mihaylov in establishing femtoscopy as an active research field in hadron physics."