Vera Rubin Fellow at the ORIGINS Excellence Cluster Dr Verónica Errasti Díez organized and led two interactive events in Spain to mark International Women and Girls in Science Day 2022. The events introduced more than 300 students to the training and daily life of researchers in STEM fields. 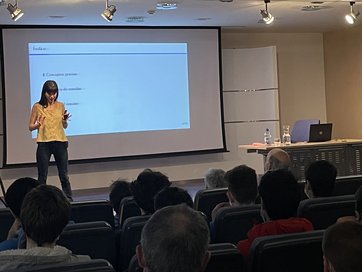 The first event, entitled “Science from a female point of view”, was held in a hybrid format: while about 30 students attended in person, a livestream via YouTube allowed nearly 200 students from seven other high schools across Spain to participate. The topic of the underrepresentation of women in science, technology, engineering, and mathematics (STEM) generated a lot of interest, as shown by the lively discussions which extended well beyond the scheduled time.