At the ORIGINS workshop “Gender Equity in Academia – a First Aid Kit”, experts from social sciences met with other academics to discuss hurdles but also inspirations for women and members of other underrepresented groups in everyday university life. Dr Verónica Errasti Díez, Vera Rubin Fellow at the Cluster, initiated this event at the Ludwig-Maximilians-Universität in Munich. It was a great success! 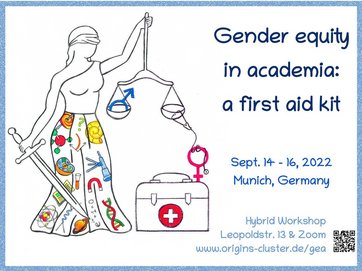 “I was a Higgs Hunter!” says Professor Rohini M. Godbole. The Emerita of the Indian Institute of Science can look back on four and a half exciting decades in theoretical particle physics. Her remarkable career was probably also made possible because she campaigned for “more sciences than just domestic science” at her girls’ school in India in the 1960s. Back then, the curriculum was indeed changed in response to her letter to the school management.

This is the story Godbole relates in her lecture “Life of a young scientist – what helps and what hinders”, which she held via Zoom at an Excellence Cluster ORIGINS workshop in September. What made the hybrid, three-day event “Gender Equity in Academia – a First Aid Kit” so special was that scientists – such as Godbole herself – who have actively contributed to more gender-equitable academic research spoke alongside specialists in the field of gender research and had extensive opportunities for discussion with each other.

A rush hour in life

The workshop was initiated and organized by two physicists: Verónica Errasti Díez, Fellow of Theoretical High Energy Physics at LMU Munich and the Excellence Cluster ORIGINS; and Elisa Ferreira, Assistant Professor in Cosmology at the Kavli Institute for the Physics and Mathematics of the Universe in Tokyo and at the Institute of Physics of the University of São Paulo. "In order to better understand the problems that affect us and colleagues in STEM subjects," explains Errasti Díez, "we have teamed up with specialists in gender studies, with sociologists, psychologists, historians." Elisa Ferreira adds: "Our problems in everyday research are the topic of their research – and we wanted to build a bridge."

In her lecture “Gender, Power, Knowledge – mutually exclusive? Sociological insights”, Professor Paula-Irene Villa Braslavsky, Chair of General Sociology and Gender Studies at LMU, addressed issues such as the unequal proportion of women at different stages of the academic career trajectory. “One reason for this is that care tasks, such as parenthood, continue to be taken on to a large extent by women, but that female scientists are also assumed to be more likely than male scientists to be responsible for them.” Villa Braslavsky also stressed that male scientists who were aiming to be active fathers would often be pushed out of science. "We need to make higher education a place where care is taken care of," she explained. “For all scientists, who are structurally precariously employed, the phase after their doctorate is unique in terms of timing and part of a very concentrated "rush hour" in life.” said Villa Braslavsky. "It seems paradoxical, but we have to talk about gender so that at some point gender is no longer an issue."

The workshop, whose advisory committee included LMU Munich women's representative Dr. Margit Weber, also explored the influence of the social climate on equity, discussed sexual harassment and presented practical examples of inclusivity. Physicist and historian Professor Maria Rentetzi, holder of the Chair for Science, Technology and Gender Studies at the Friedrich-Alexander-University Erlangen-Nuremberg, believes that, above and beyond institutional measures, the new generation “has a personal obligation to fight for their position in the sciences and change physics from within".

Dr. Tana Joseph, Equity and Inclusion Officer for Dutch Astronomy at AstroComms, spoke about unequal opportunities even among women themselves, depending on origin, skin color, nationality, disability and, for example, religious persuasion. One of the two male speakers, particle physicist Dr. Brian Henning of the École Polytechnique Fédérale Lausanne (EPFL), felt that men, too, needed to be included in this important discussion. He reported on a workshop on inclusivity that he had held with colleagues. This had benefited from the diversity of the participants, from their presence and their questions. By no means least, it had also led to better science.

A similar point was raised by Dr. Audine Laurian, Scientific Manager at LMU Munich’s Meteorological Institute, in her comic book project "Of course!". The colorful picture stories trace inspiring careers of scientists in astrophysics, marine biology and atmospheric research, but also illustrate problems and strategies to overcome them. In one story, a male scientist reports how greater diversity improved the climate – and thus the quality of collaboration – in his working group. In another, a physics professor and mother shares how she was able to inspire her students as a role model.

Rohini M. Godbole advises young researchers to build networks and find their own niches. Regarding household activities and childcare, she says: "Don't try to be superwomen! You can't do everything! Do not feel guilty about asking for support and help in this period." The physicist sums it up: "A life in science can be hard, no matter what gender you belong to. But good things come at a price! And all I can say is: It’s worth it.”