Members of the H0LiCOW team led by ORIGINS Scientist Sherry Suyu at the Max Planck Institute for Astrophysics and the Technical University of Munich used a number of telescopes and a technique that is completely independent of any previous method to measure the universe's expansion rate, a value called the Hubble constant. The researchers' result further strengthens a troubling discrepancy between the expansion rate calculated from measurements of the local universe and the rate as predicted from background radiation in the early universe. The new study adds evidence to the idea that new theories may be needed to explain what scientists are finding. 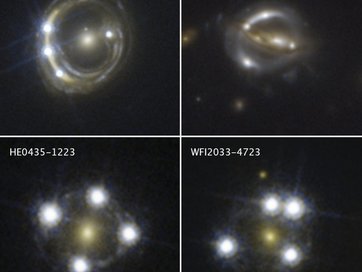 Each of these Hubble Space Telescope snapshots reveals four distorted images of a background quasar surrounding the central core of a foreground massive galaxy. The multiple quasar images were produced by the gravity of the foreground galaxy, which is acting like a magnifying glass by warping the quasar’s light in an effect called gravitational lensing. Quasars are extremely distant cosmic streetlights produced by active black holes. The light rays from each lensed quasar image take a slightly different path through space to reach Earth. To trace each pathway, the astronomers monitor the flickering of the quasar’s light as its black hole gobbles up material. The flickering sequence of the different images allows researchers to measure the time delays between each image as the lensed light travels along its path to Earth. These time-delay measurements helped astronomers calculate how fast the universe is growing, a value called the Hubble constant. Image Credits: NASA, ESA, S.H. Suyu, and K.C. Wong

Knowing the precise value for how fast the universe expands is important for determining the age, size, and fate of the cosmos. Unraveling this mystery has been one of the greatest challenges in astrophysics in recent years. This latest value for the Hubble constant represents the most precise measurement yet using the gravitational lensing method, where the gravity of a foreground galaxy acts like a giant magnifying lens, amplifying and distorting light from background objects.

Worldwide cooperation makes it possible
The astronomy team that made the new Hubble constant measurement is dubbed H0LiCOW (H0 Lenses in COSMOGRAIL's Wellspring). COSMOGRAIL is the acronym for Cosmological Monitoring of Gravitational Lenses, a large international project whose goal is monitoring gravitational lenses. "Wellspring" refers to the abundant supply of quasar lensing systems. For their latest measurement, the team used new data from the Hubble Space Telescope as well as from the ESO/MPG 2.2m telescope and the ESO’s Very Large Telescope, Chile, wide-field imaging from the Dark Energy Survey and high-resolution Adaptive Optics imaging from Keck Observatory.

H0LiCOW and other recent measurements suggest a faster expansion rate in the local universe than was expected based on observations by the European Space Agency's Planck satellite of how the cosmos behaved more than 13 billion years ago. The gulf between the two values has important implications for understanding the universe's underlying physical parameters and may require new physics to account for the mismatch.

"If these results do not agree, it may be a hint that we do not yet fully understand how matter and energy evolved over time, particularly at early times," said H0LiCOW team leader Sherry Suyu of the Max Planck Institute for Astrophysics (MPA) in Germany, the Technical University of Munich, and the Academia Sinica Institute of Astronomy and Astrophysics in Taipei, Taiwan.

Significant differences between early and late phase of the Universe
The researchers calculated a value for the Hubble constant of 73 kilometers per second per megaparsec (with 2.4% uncertainty). The team's measurement is close to the value of 74 calculated by the Supernova H0 for the Equation of State (SH0ES) team – an independent measurement compared to this “traditional” cosmic distance ladder technique. The SH0ES measurement is based on gauging the distances to galaxies near and far from Earth by using Cepheid variable stars and supernovas as measuring sticks to the galaxies. The SH0ES and H0LiCOW values significantly differ from the Planck number of 67, strengthening the tension between Hubble constant measurements of the modern universe and the predicted value based on observations of the early universe.

“While our first results already hinted at this high value for the Hubble constant, we are now more certain that there is indeed a systematic difference between the values at early and late cosmic times,” explains Suyu. Stefan Taubenberger, team member at the MPA further adds “Our H0LiCOW value is significantly higher than Planck’s value – scientifically speaking, with more than 3-sigma significance – and combined with the SH0ES measurement the significance increases even further.”

Refining the measurements
Begun in 2012, the H0LiCOW team now has Hubble images and time-delay information for 10 lensed quasars and intervening lensing galaxies. The team will continue to search for and follow up on new lensed quasars in collaboration with researchers from new programs. The team's goal is to observe 30 more lensed quasar systems to reduce their uncertainty for the Hubble constant measurement to 1%.

Press release of the Max Planck Institute for Astrophysics