Stellar Theatre: Glamour and Drama near the Sun

What do we humans have in common with stars? Humans are born, live and die one day – so do stars. But with stars, everything happens over long cosmological time scales and with much more glamour and drama. An international research team, with the participation of the ORIGINS Excellence Cluster, has now reconstructed the history of the interstellar neighbourhood of our Sun, thereby showing how precisely star formation and stellar death are connected. The Sun is at the centre of a constantly growing, dust-free bubble whose dense rim is the birthplace of new stars. 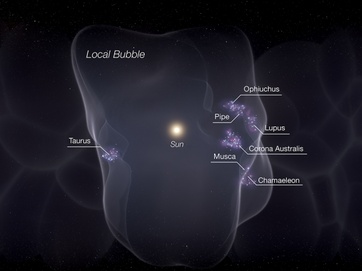 Artist's impression of the Local Bubble with star forming regions on the surface and the Sun in the centre. Image: Leah Hustak, Space Telescope Science Institute.

Stars form in cool molecular clouds consisting mainly of hydrogen and dust grains. Where the density is sufficiently high, gas clumps can collapse under their own gravity and heat up by compression. Stars form rarely alone and only when the temperature in the gas clumps becomes so high that the hydrogen ignites. The closest molecular clouds to the Sun comprising of young stars that are only a few million years old are those of the Scorpius-Centaurus association at a distance of about 400 light years.

Stars can live for billions of years, depending on how massive they are, by creating through nuclear fusion a balance between the radiation force and the gravitational force. When a massive star has used up all its fuel, it explodes as a supernova, ejecting several solar masses of material. A shock wave then spreads through interstellar space, sweeping up surrounding gas and dust.

The Earth and our Sun sit in a clean swept cavity of hot, interstellar gas of exceptionally low density called the Local Bubble. What exactly does this have to do with star formation and supernovae? The research team led by Catherine Zucker of the Harvard-Smithsonian Center for Astrophysics mapped the motion of young stars in the star-forming regions closest to the Sun, creating for the first time an accurate three-dimensional map of our galactic vicinity. Using new data from the Gaia space telescope, the astronomers found that almost all star-forming clouds within 500 light-years of the Sun are on the surface of the Local Bubble. "It's astonishing, after a supernova, no new stars can form at the original star formation site, " explains Prof. Andreas Burkert, researcher at the ORIGINS Excellence Cluster and co-author of the paper published in Nature. "The low-particle-density cavity in which the Earth and the Sun are today, has a diameter of about 1000 light years and is surrounded by a border of dense gas. And it is precisely this rim where the next star-forming regions are then located," Burkert continues.

The motion of the young stars also revealed that the Local Bubble is an expanding structure. It was formed 14 million years ago by a series of about 15 supernova explosions that produced shock waves over a few million years. Gas and dust were swept away and deposited on the surface of the Local Bubble. This triggered several episodes of star formation that occurred approximately two, six and ten million years ago.

Stardust at the bottom of the sea

The fact that today the Sun is roughly in the centre of the Local Bubble is a coincidence. We do not know where exactly the stellar nursery of our Sun was 4.6 billion years ago. However, we can trace the Sun's motion around the galactic centre 14 million years back into the past. This shows that the Sun was far away when the Local Bubble was formed. About five million years ago, the Sun entered the Local Bubble on its journey through the Milky Way, and in a few million years it will leave it again. Statistically speaking, there must be thousands of such bubbles in the spiral arms of our galaxy. So the Sun is just a spectator travelling from one bubble to the next.

When the Earth and the Sun entered the Local Bubble a good five million years ago, the first great apes were populating the planet. It is unlikely that they noticed anything special happening, but the event did leave traces. There is no natural process on Earth that produces the radioactive iron-60 isotope. Nevertheless, it is found in deep-sea sediments. The unstable element, which has a half-life of 2.6 million years, therefore comes from interstellar dust particles that landed on Earth. Dating the sediment layers by counting 60Fe atoms shows that the Earth must have passed through supernova ejecta a few million years ago. (os)