Dancing pattern of red supergiant stars on the sky

The bubbling surface of massive giant stars causes their observable positions on the sky to wobble. An international team lead by astrophysicists at the ORIGINS Excellence Cluster has now performed detailed simulations of the gas motions in the atmospheric layers of these stars and compared these with high-quality data of the Perseus stellar cluster. They find that the surface structures could indeed account for a large part of the measurement uncertainty in the observations. 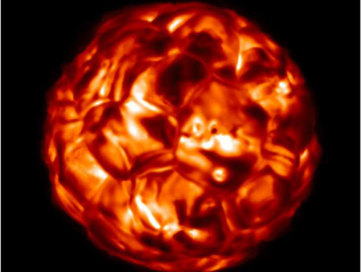 At least one bubbling star is very well known: In the 19th century astronomers have observed small patterns on the surface of the Sun (so-called “convective cells”), which move like the boiling water in a pot. In the Sun’s outer layers, the gas heats up and rises to the surface, where it cools and then sinks down again. A similar process also happens in massive evolved stars, such as red supergiants. These stars are at least eight times more massive that the Sun, much cooler (about 3500 Kelvin) and enormous, they have at least 700 times the diameter of the Sun). If our Sun would be a red supergiant, its surface would extend beyond the orbit of Mars.

Red supergiants have expanded so much that their surface gravity is extremely low: it can be more than 70,000 times smaller than the solar one (i.e. similar to the Moon’s surface). Because of this low gravity, the convective cells become extremely extended and can occupy up to 30% of the stellar radius. Moreover, the convection moves gas from the interior to the surface, favouring the ejection of matter into the circumstellar environment. The quantity of gas released by a red supergiant is colossal, one billion times the solar mass-loss. They are the brightest stars in the universe at infrared light and the study of their physical properties is very important to better understand the late stages in the evolution of massive stars.

However, one major uncertainty in the observation of red supergiants is that the position of the photo-center – i.e. the center of light – does not coincide with the barycenter of the star and changes as the convective pattern evolves with time. A theoretical approach is necessary to quantify these motions, based on three-dimensional, hydrodynamic simulations of the gas motion in the atmospheric layers of stars, coupled with radiation. These models simulate the whole envelope of the star over time.

“The synthetic maps show extremely irregular surfaces, where the largest structures evolve on timescales of months or even years, while smaller structures evolve over the course of several weeks,” remarks Andrea Chiavassa of the Laboratoire Lagrange, the ORIGINS Excellence Cluster, and the Max Planck Institute for Astrophysics, who led the study. “This means that the position of the star is expected to change as a function of time.”

The team calculated the displacement of the photo-center in the simulations and compared it with the measurement uncertainty of stars in χ Perseus, a nearby, young stellar cluster in the EDR 3 data release of the Gaia mission. Gaia is an astrometric, photometric, and spectroscopic space-borne mission that is performing a survey of a large part of the Milky Way. The Perseus stellar cluster is well-studied and contains a relatively large population of red supergiants as well as other stars. “We found that the position uncertainties of red supergiants are much larger than for other stars. This confirms that their surface structures change dramatically with time as predicted by our calculations”, explains ORIGINS PI Rolf Kudritzki, co-author of the study, the Munich University Observatory and the Institute for Astronomy, Hawaii.

Red supergiants largely contribute to the chemical enrichment of galaxies. A detailed knowledge of wind physics across the life cycle of these stars is necessary to understand stellar evolution in the near and distant Universe and its impact on the cosmic environment. This requires to trace the total mass ejected as well as its nature, the velocity of the winds, and the overall geometry of the circumstellar envelope.

“The dancing pattern of red giant stars on the sky could teach us more about their boiling envelopes”, explains Selma de Mink, co-author and director at the Max Planck Institute for Astrophysics. “With our approach and combined with the Gaia data, we will be able to extract important information about the stellar dynamics and better understand the physical processes that cause the vigorous convection in these stars.”