ORIGINS scientist and Max Planck Institute for Astrophysics (MPA) Director Eiichiro Komatsu has been selected as one of the recipients of this year's Inoue Prize for Science. He is recognized for his work to study the physics of the early Universe as a researcher with remarkable achievements in the natural and fundamental sciences. 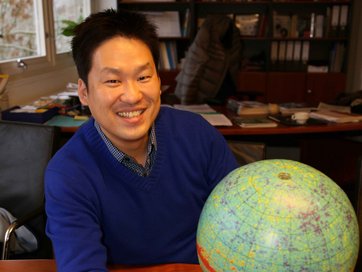 The Inoue Prize for Science is awarded to Eiichiro Komatsu for his work to study the physics of the early Universe. With the prize, the Inoue Foundation for Science recognizes researchers under 50 who have made remarkable achievements in natural and fundamental sciences. The prize was established in 1984 and comes with a gold medal and some research funding. An award ceremony will be held on February 4, 2022 for this year's recipients.

From the Big Bang to the Universe we know today

The Standard Model of cosmology is known as the “ΛCDM model”, with Einstein’s cosmological constant “Λ” or “Dark Energy“, which is responsible for the accelerated expansion of the Universe, and “Cold Dark Matter”, which is the dominating form of matter in the Universe. However, the most extraordinary ingredient of the standard model is not contained in its name – and it’s a hard one to grasp: It is the idea that our ultimate origin is the quantum mechanical fluctuation generated in the early Universe.

The theory of inflation and the Inoue Prize for Science have a long history together. Inflation was proposed 40 years ago by Prof. Katsuhiko Sato and others; Sato received the 5th Inoue Prize for Science in 1988. Prof. Jun’ichi Yokoyama, who studied the novel aspects of inflation that were not known when theory was proposed originally, received the 29th prize in 2012. Now, Eiichiro Komatsu receives the prize for looking for the traces that inflation leaves in the data from the CMB. “We are close to figuring out whether the period of cosmic inflation actually occurred in the early Universe”, explains Eiichiro Komatsu. „Our research follows the path paved by these pioneers. This prize encourages us to take the next step towards finding definitive evidence for inflation.”

After obtaining his science doctorate from Tohoku University in Sendai, Japan, in 2001, Eiichiro Komatsu went to Princeton University as WMAP Fellow and became Professor of Astronomy at the University of Texas at Austin. Since 2012, he is Director at the Max Planck Institute for Astrophysics in Garching, Germany, since 2017 Principal Investigator at the Kavli Institute for the Physics and Mathematics of the Universe, and since 2019, co-coordinator of the Research Unit “The Origin and Evolution of Large-Scale Structure” at the ORIGINS Excellence Cluster.