This year, Frank Eisenhauer, ORIGINS scientist from the Max Planck Institute for Extraterrestrial Physics, will be awarded the Gruber Cosmology Prize for his revolutionary development of instruments that have gathered irrefutable evidence for the existence of a black hole at the center of our galaxy. The award recognizes the "unprecedented and exquisite" precision of his instruments. 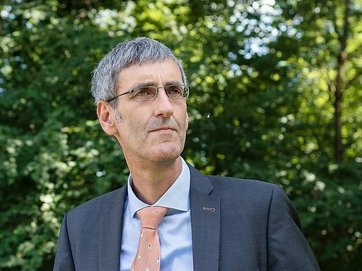 In 2018, the GRAVITY experiment observed the progression of various phenomena near Sagittarius A*, or Sgr A*, a supermassive and therefore gravitationally voracious unseen object at the center of our galaxy. Thanks to Eisenhauer's engineering innovations, the GRAVITY team found that the motion of stars and gas near the galactic center is consistent with theoretical predictions consistent with the existence of a black hole.

GRAVITY is based on an earlier experiment

Frank Eisenhauer developed a breakthrough technology for imaging spectroscopy - measuring how matter affects the absorption and emission of light. The instrument is part of SINFONI, the "Spectrograph for INtegral Field Observations in the Near Infrared" at the European Southern Observatory's ESO Very Large Telescope on Mount Paranal in Chile. Eisenhauer's designs, in fact, revolutionized several types of instruments, including imaging detectors, laser measurement techniques, and simultaneous interferometric observation of two objects.  In 2003, SINFONI began observing stars making their extremely fast, highly eccentric orbits under the large gravitational influence of Sgr A*.

Two years later, the group of German and French researchers led by Eisenhauer and Reinhard Genzel, Stefan Gillessen, Pierre Lena, Guy Perrin and Thibaut Paumard, discussed the possibility of observing the flyby of the star S2 at the galactic center in 2018. By combining all four 8-meter telescopes at Paranal (through a process called interferometry), the experiment could achieve the thousand-fold improvement in sensitivity over previous interferometers needed to measure relativistic effects near SgrA*, they said.

Its technological innovations are changing astronomy

"This project was considered technically impossible by some," wrote one of the scientists who nominated Eisenhauer for this year's Gruber Cosmology Prize. However, supporters of the project argued that even if the experiment failed to achieve its goals, any technological advances would be of general benefit.

GRAVITY has achieved all of its goals and, since 2017, has enabled precise measurement of the effects of general relativity from Sgr A* to S2, measurement of the distance between the Sun and the Galactic center with an accuracy ten times greater than previous measurements, and a test of Einstein's general theory of relativity using supermassive black holes with the highest precision to date. Meanwhile, other astrophysicists are also using the GRAVITY instrument, for example to study distant galaxies, black holes at the centers of nearby galaxies, stars and exoplanets.

Eisenhauer will receive the $500,000 prize and a gold laureate pin at a ceremony Aug. 2 at the XXXI General Assembly of the International Astronomical Union in Busan, Korea.