After 60 years of unsuccessful searches, an international research team has discovered a neutral nucleus for the first time - the tetra-neutron. The collaboration succeeded in creating an isolated four-neutron system with low relative kinetic energy in a volume equivalent to an atomic nucleus. The researchers overcame the experimental challenge by using a new method: a radioactive neutron-rich ⁸He beam and a fast high-energy reaction with a proton. 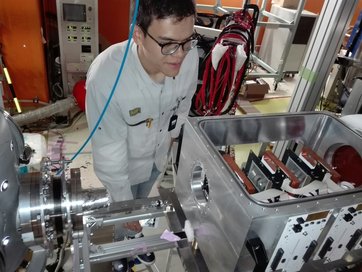 Master student Florian Dufter from the working group of ORIGINS PI Prof. Laura Fabbietti of the TUM during the extremely critical work of integrating the liquid hydrogen target (left) into the vacuum chamber of the silicon detector (right) that he constructed. In the construction phase of such a complex structure, even the smallest mistake can jeopardize the success of the entire experiment. Image: R. Gernhäuser / TUM 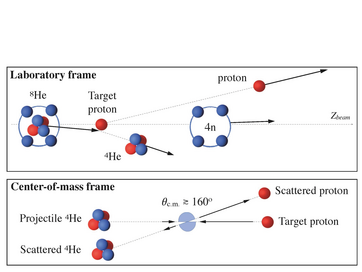 Schematic representation of the reaction kinematics in the laboratory and center of gravity system. Graphic: M. Duer et al. 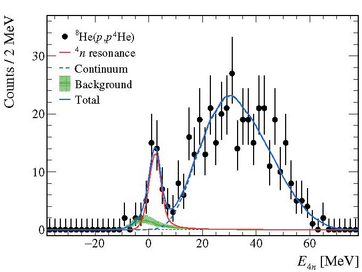 The measured energy spectrum reveals the tetra-neutron as a peak at about 2 MeV with high statistical significance of more than five standard deviations, as required for a discovery claim. The tetra-neutron is unbound by about two MeV, and the width of the peak corresponds to a very short lifetime, on the order of only 10^-22 seconds. Graphic: M. Duer et al.

The experiment was conducted at the Radioactive Beam Accelerator Facility (RIBF) at the RIKEN Research Center in Japan. In addition to the Technical University Munich (TUM) and the ORIGINS Cluster of Excellence, scientists from the TU Darmstadt, the RIKEN Nishina Center and the GSI Helmholtz Center for Heavy Ion Research in Darmstadt were major contributors in the large international collaboration. The experiment provided an unequivocal signal for the first observation of the tetra-neutron. The result was published in the journal "Nature".

Relatives in the Universe

The building blocks of atomic nuclei are the nucleons, which come in two types, the neutral neutrons and the positively charged protons – the two so-called isospin states of the nucleon. Bound nuclei composed exclusively of neutrons have never been clearly identified. The only known bound systems that consist almost exclusively of neutrons are the neutron stars. These are the final stages of stellar evolution with a typical diameter of about ten kilometers. These stars are stable (bound) by gravity, which leads to a very high neutron density inside the stellar corpses. Atomic nuclei, in turn, are bound by the strong interaction, with preference to bind a comparable number of neutrons and protons – this is known from the stable nuclei found on Earth.

However, the study of pure neutron systems is of great importance, since this is the only way to gain experimental knowledge about the interaction of several neutrons with each other and thus about the nuclear interaction. Moreover, the study of the hitherto hypothetical particles could help to better understand the properties of neutron stars. Finding out whether such neutron systems exist as resonance states or even bound nuclei is therefore a long-standing endeavor in nuclear physics. The international team of scientists has now made a new attempt to do this, using a new experimental method that differs from all previous experiments.

Reference value for the theory

"This experimental breakthrough provides a reference value for theory in understanding the interactions of isospin-pure nucleon assemblies and thus the properties of neutron-rich nuclei. The nuclear interaction between more than two neutrons could not be tested experimentally so far, while theoretical predictions lead to very different results," reports Dr. Meytal Duer from the Institute of Nuclear Physics at TU Darmstadt.

The experimental investigation of pure neutron systems represents a major challenge because there is no way to produce a neutron target. In order to create a multi-neutron system in a volume so that the neutrons can interact with each other via the short-range nuclear force (a few femtometers, 10-15 meters), reactions must be used. In doing so, there is a risk that the neutrons will interact with other particles involved in the reaction in the final state, which in turn will alter or render invisible the actual signal. The researchers solved this difficulty by using a high-energy 8He beam. The 8He nucleus consists of a compact alpha particle surrounded by four neutrons. The alpha particle is ejected from the 8He nucleus in a fast reaction with large momentum transfer by collision with a proton of the liquid hydrogen target: The remaining four neutrons are suddenly free and alone and can interact with each other.

"Only an optimal combination of different factors made the successful discovery of the tetra-neutron possible. There is the ingenious idea of choosing exactly the right reaction, the world's most powerful facility for light exotic beams, an experimental setup that was developed and optimized exactly for this reaction, and last but not least, a team of enthusiastic scientists who identify 100 percent with the task," elaborates ORIGINS PI Dr. Roman Gernhäuser of the Central Technology Laboratory at the Physics Department of TUM.

The work to discover the tetra-neutron was funded by the German Research Foundation (DFG) through the Collaborative Research Center 1245 and the Cluster of Excellence ORIGINS, EXC-2094 – 390783311.