Our Sun counts more than 400 stars and an ever-growing number of exoplanets among its immediate neighbours within ten parsecs (or 33 light-years). Now, two new Super-Earths are added to the list that are just at the edge of the solar neighbourhood and in the fourth closest stellar system. They were recently discovered by an international team of researchers, including Dr. Karan Molaverdikhani from ORIGINS PI Prof. Barbara Ercolano's research group. Life is unlikely on these two exoplanets, but they are among the best candidates for the observations by the James Webb Space Telescope, which will spectroscopically study the atmospheres of the two Super-Earths. 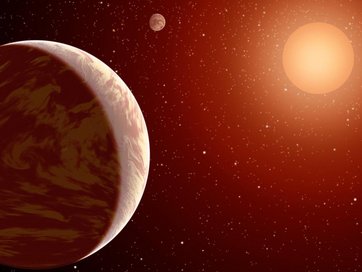 Using NASA's planet hunter, the Transiting Exoplanet Survey Satellite (TESS), scientists discovered two sibling planets, HD 260655 b and HD 260655 c, which orbit a bright red dwarf star just 33 light-years away. TESS finds exoplanets by looking for "transits”. This tiny drop in starlight as a planet passes in front of its star provides information about the planet's diameter and orbit. The researchers also used data from ground-based spectrographs, such as CARMENES at the 3.5m-telescope in Calar Alto in Spain, to confirm the existence of the two new planets. The telescopes measure a star's "wobble," which is caused by the gravitational forces of the planets orbiting it, and from which the planets' masses can be calculated.

Combining the measurements, the researchers were able to determine the density of the two planets, confirming that they are rocky worlds that are only slightly larger and more massive than the Earth. Planet b is about 1.2 times and planet c 1.5 times the size of Earth. However, the two worlds are unlikely to harbour life because they are both far too hot. The temperature on planet b, which is closest to the host star, is estimated to be 435° C. And even on planet c, the temperature scale reaches about 284° C. Current measurements indicate that the planets do not have extended hydrogen atmospheres but might have secondary atmospheres, containing water or carbon dioxide.

"The planets we newly discovered are excellent targets for further atmospheric studies because of the relatively high apparent brightness of the host star," explains Karan Molaverdikhani of the University Observatory of Ludwig Maximilian University in Munich. "At 33 light-years, the planets are relatively close to us. Their star is smaller than our sun, but one of the brightest in its class," Molaverdikhani continues. These and other factors increase the likelihood that the James Webb Space Telescope and perhaps even the Hubble Space Telescope will be able to capture the star's light shining through these planets' atmospheres. Spectroscopic studies will allow the science team to draw conclusions about the composition and structure of their atmospheres and gain knowledge on how climates on terrestrial planets work in general, including our own.